Oh, The Places We Stay

We are staying in some interesting and wonderful places on this trip to England. I have already posted about the Back to Backs. Since then we have moved on to the countryside and stayed in a converted barn with a very large, open apartment, then moved on to an apartment in a stately country home that was first built in the 1600s. We can't ask for better places to stay, cook our own meals, and learn more about the English way of life.

Widdop Gate Barn is a 3-level modern apartment built in an old barn. The place is named for a gate along a road between Hebden Bridge and the neighboring town. We had a great kitchen with dishwasher, fridge with large freezer, microwave and clothes washer and dryer. Seven steps up there was the bathroom, a bedroom and the dining room. Up 7 more steps we were in the sitting room with TV and cabinets full of games and puzzles. One more flight of 7 steps we were in the master bedroom. 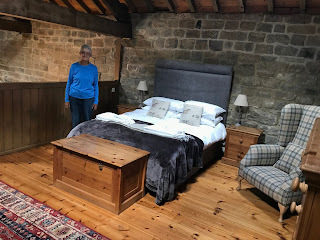 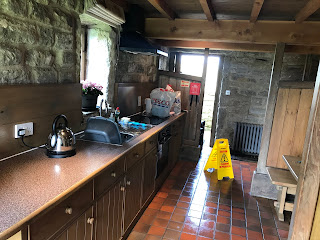 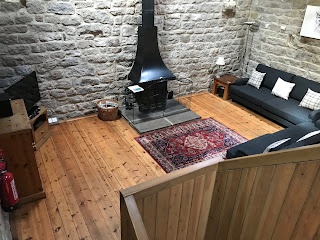 The views over the Yorkshire countryside with green pastures, stacked stone walls and flocks of sheep were beautiful and quiet. 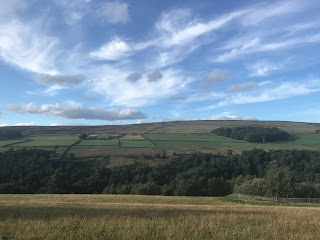 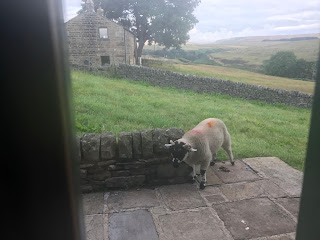 As we drove along the narrow roads, pedestrian paths were frequently marked. We were close to both paths down to the gorge and the Hardcastle Crags. There we toured a mill and enjoyed a lunch.

Then we were on to Sand Wath, a 3-room apartment on the top floor of the Manor of Temple Sowerby, which once belonged to the Knight Templar until the order was dissolved in 1312. The original house was built in the late 16th or early 17th century and revamped and added-on to through the late 18th century. Our apartment was created since the 1950s, possibly in the 1990s when the National Trust began opening the house to the public. 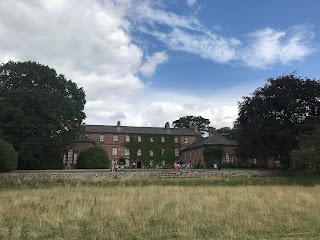 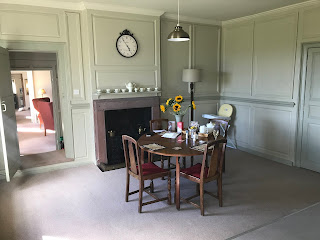 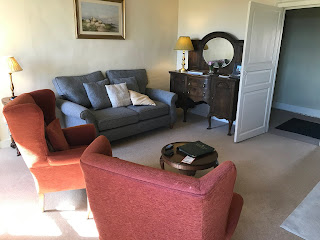 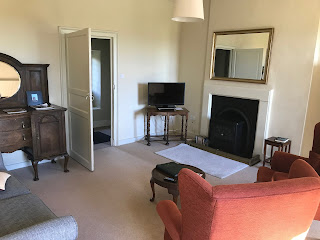 When you live in a building where construction began 350 years ago, you can't expect level floors. The hallway in our unit is slanted, not only from end to end, but also sideways. It is very disorienting, especially in the middle of the night, for sure. Here, we have 4 flights of stairs to reach the apartment but there is only one step in side.

There are at least 3 other apartments in the building, plus a gift shop, book shop, and herb drying room. The manor house is surround by a 180 acres of park and woodland with a garden and a water-powered grist mill and old gypsum mine. We have views over the grounds which have many large, very old trees. That includes the Dalston Oak, over 500 years old. The garden includes an orchard with trees of more than 100 varieties of apple, as well are plum and pear trees. There is also an herb garden and sunken garden.

On a previous trip to England in 1990, we stayed in National Trust facilities at the Coast Guard Cottage on the Isle of Wight, at the lighthouse keepers cottage at Dover, and at an apartment in Standen, a large old house at East Grinstead outside London.

This post is long enough, so I will post it when possible and talk about our next 3 National Trust holiday cottages and the trust itself in a future post.

Sent from my iPad
Posted by John and Carol at 7:40 AM