This was to be one of the themes for our travels in England this year. Our first stop was the British Library in London. Often, libraries provide great resources about the past. We have traced some family roots back to the 13th and 14th centuries in the country and the European continent. Those lines are often faint, but they are there. But when we asked at the front desk of the British Library about records from the 1600s, it was pointed out that the printing press wasn't widely available until the 1700s and very few written records of any type exist from that long ago unless our ancestor was famous—our weren't.qqqq

Since the 1600s are so important in American history, we know quite a bit about it—the Mayflower, the Pilgrims, then the Puritans. They are copiously covered in our history because that is the beginning of our modern story. That isn't as true in England. After searching on both the first and fifth floors of the British Library, we decided we should revise our methods.

Once we got to Hebden Bridge, we went looking for the community of Wiswell or Wyswell. John's grandmother on his father's side was a Wiswell and the family is well researched—at least to the arrival on American shores of Elder Thomas Wiswell in the 1620s. I had found years ago that there was a village in England with that name. 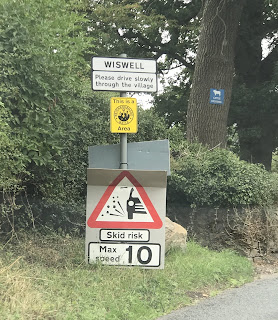 As we got closer to our destination using Google maps and our TomTom, twice we asked for directions. I went into a dress shop where the shop mistress smiled and told me how to find the community. A little later, still not seeing any signs, we pulled into the parking area of an apartment complex. A man came out of his apartment to get into his car and I asked him if he knew where Wiswell was located. "Go out of here, turn left, then left again. You'll come to the church. Across the road there is a car park. Park in there and walk nearby and you find the Wiswell Arms, a pub. This is only a tiny hamlet, there isn't a shopping area but there is that pub." So many people are so helpful here in England.

Womersely—looking like for a good pub or anything else in this community where some of my dad's aunts and uncles came form, we talked to a man who related there is no pub in Womersley. Mrs. Parsons (I think), matriarch of the family who had owned the town had seen too many lives wrecked by alcohol and would not allow anyone to establish a pub there. When she died, her will stipulated that, as long as any of the family members remained in the town, there could be no pub there. Ironically, one of her sons died an alcoholic.

We did, eventually, find Wiswell and took photos of the Wiswell Arms and other signs with the family name. In Womersley, we found St. Martin's Church and walked around inside, as well as in the graveyard surrounding the old building. Upon checking our records when we returned to our rented cottage, I found that my dad's great? aunt was baptized in that church. 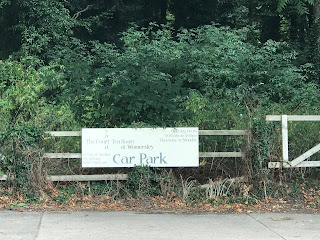 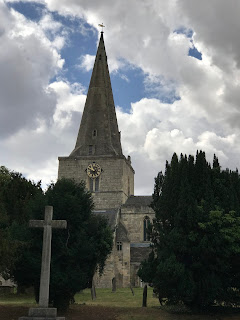 Sent from my iPad
Posted by John and Carol at 6:24 AM