Before interstate highways, before airline transportation, before the railroad, people and goods traveled on the water. That might have been across an ocean, along the sea coast, or on rivers and canals through the countryside. And that is still true today. We have been on one ocean cruise in the Caribbean and one canal boat trip in Sweden. On this trip, we haven't been on the water but we have seen a canal barge and watched barge traffic on the mighty Mississippi River.

While parked in Utica, Illinois, we went to see the Illinois and Michigan Canal. We learned that between 1836 and 1848 immigrant workers dug the 96-mile I&M Canal by hand. It opened a waterway between the New York harbor and the Gulf of Mexico, making Chicago our country's greatest inland port. Imagine what a difference that made to people in the middle of the country with reliable transportation and easier access to goods coming from the East and Europe as well as from the Gulf of Mexico.  It also opened distant markets to goods from the center of the country. The canal closed in 1933, replaced by larger water-ways, railroads and highways.

There was a photo of 102 barges parked in the near-by LaSalle Basin, waiting to move goods on the canal. Part of the canal has been restored by volunteers and one canal boat is on display. Apparently, some days you can take canal boat rides. This is the restored "Volunteer" canal boat. We didn't take a ride but we did walk along the shady path next to the canal. The boats were pulled by mules and the locks opened and closed by human power. 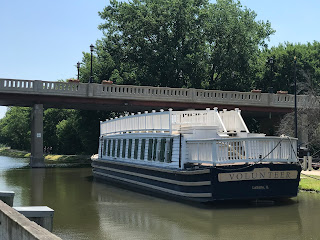 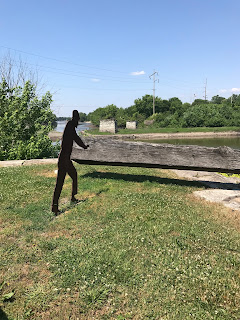 We also walked along the shady trail along the canal.  I imagine that is where the mules that pulled the canal boats walked. 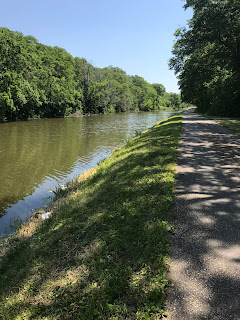 Our next stop was at a Corps of Engineers' campground on the west bank of the Mississippi, just south of Davenport, Iowa. We could watch barges being pushed up and down the river, full of goods. My cousin said oil, coal and grain are among the goods shipped by barge. Barge tows contain 12 to 15 barges, 3 abreast. Although called a tow, they are pushed by a boat at the rear. 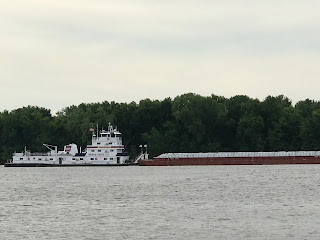 Several years ago we camped by the Arkansas River and saw barge traffic there, as well.