Do you remember where you were on this day?  We do.  We were in a campground in Staunton, Virginia, talking on the phone to our son Eric.  In the midst of the conversation he said "another plane hit a building."  We asked what was going on and he said turn on the TV. 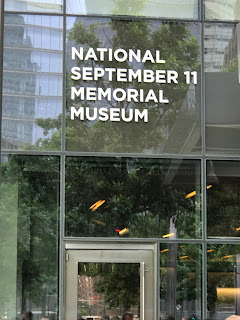 Over my adult lifetime, our country has faced three significant trauma:  the assignation of President John F. Kennedy, the Oklahoma City bombing and 9/11.  I remember where I was when I heard about each event.  I immediately turned to the TV to watch the events unfold.  During our RV travels, we have visited the 6th floor of the Texas Book Depository where Lee Harvey Oswald stood to shoot Kennedy.  We have visited the Oklahoma Bombing Memorial.  In 2010 we came to New York City to see the site of the twin towers destroyed by planes in 2001.   Here is a link to my post about that visit.  This year when I knew we would be near New York, I knew I wanted to see the Memorial built at that site.

After lunch in Times Square, we took the subway to the site.  On September  11, 2001, a subway stop was located in the basement of one of the towers and it was badly damaged when the buildings collapsed.  Today, the subway comes up nearby in a beautiful shopping complex. 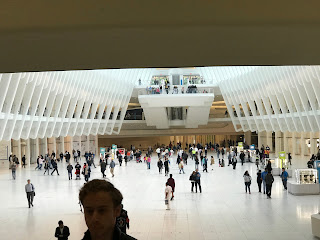 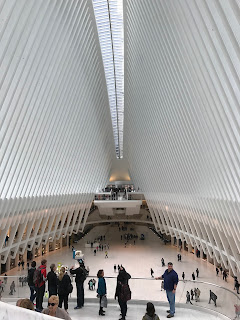 Two pools mark the location of the two towers.  The water flows over the side into a shallow pool then into the center drain.  The wall around the pool list the names of those killed that day, including the first responders who came to help the first victims. 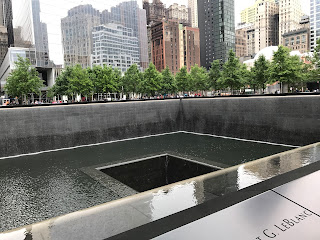 In 2010 we could see a work site like this where the towers had stood.  Today this construction will lead to a new office building. 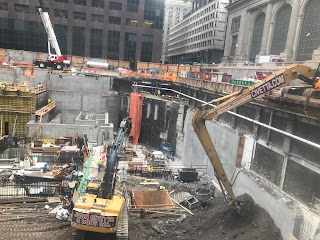 The 9/11 museum gives a gut-wrenching view of the damage done that day and plays recordings of people describing what they saw when the planes flew into the towers and then when the towers collapsed.  This shows one of the foundation walls of one tower and a girder from one of the buildings, marked by names of the fire units that responded and whose firefighters died in the building collapses. 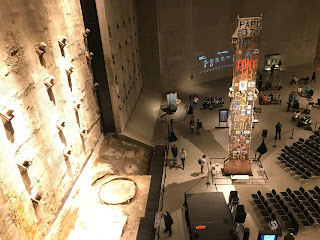 This is the radio and TV communication equipment that was on the top of the north tower. 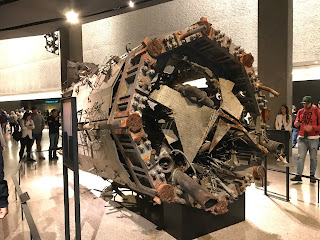 This is the motor of one of the elevator motors in one of the towers. 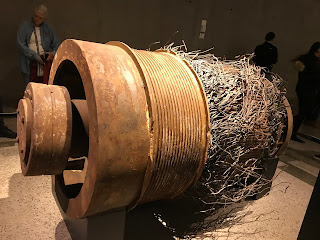 This fire truck was destroyed when on of the towers collapsed. 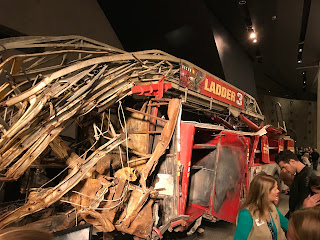 It is important to remember what happened to our country that day. If you go to New York it is well worth your time to visit the memorial.