It is hard to escape the shadow of Harry S. Truman, 33rd president of the United States, when you visit Independence, Missouri.  We spent 2 nights there on our way west.  Since we had been here before, we didn't visit any of the Truman historic sites.  But the Campus RV Park is right on the edge of downtown Independence so that is where we went on our daily walks.  There is a statue of Truman in front of the Jackson County Courthouse in Independence.  Truman had served as a judge in that courthouse. 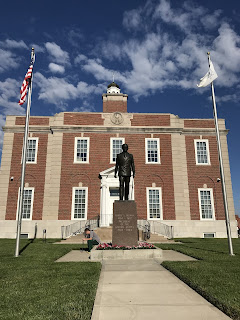 Especially after completing his two terms as president, Truman and his wife returned to Independence, where he took long walks.  Those walks became well-known and so both the statue above and flags on city streets show him striding forward. 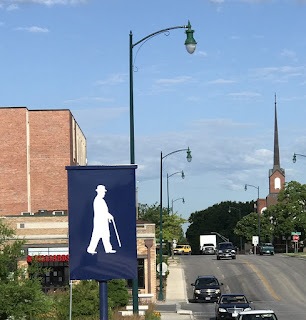 Clinton's Drug Store in town is where Truman first met Margaret "Bess" Wallace, who he married in 1919. 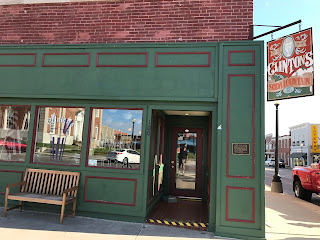 This beautiful house is now the Serendipity Bed and Breakfast.  We passed it coming and going from the RV park. 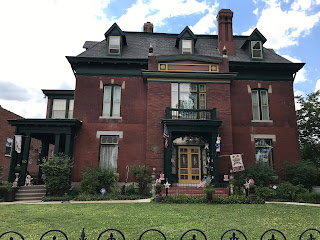 This old home is Overfelt-Johnston House, built in 1850. 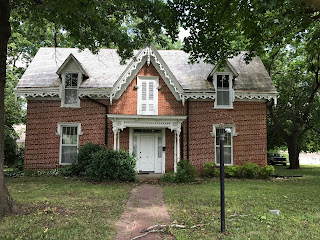 Also dominating your view is this spire atop and temple of the Community of Christ (formerly the Reorganized Church of Jesus Christ of Latter Day Saints). 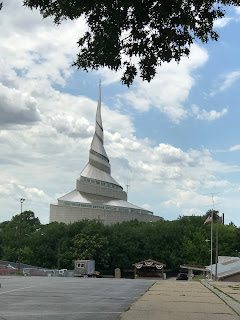 If we ever return to Independence I would enjoy going to the National Frontier Trails Museum.  The town was where pioneers who traveled the Santa Fe, Oregon and California trails organized and bought the supplies.  It must have been quite a place each spring in the first half of the 1800s.