John and I were both born in the middle of World War II and neither of our fathers were in the service during that war. Therefore, though we have studied and read about this period in history, it is a somewhat abstract idea. But not here in England. Almost everywhere we go, there is some physical evidence of the war damage.

We have worshipped in two churches that were gutted by German bombing during the blitz, only to be rebuilt by the faithful and believing members of the congregation. In Coventry, the skeleton of the bombed-out building still stands. The steeple remains and houses a book and gift shop as well as stairs to the top. A new, modern church has been built right next door and the congregation has fostered the Society of the Cross of Nails, an international group focused on forgiveness and reconciliation. The café on the church grounds is named Rising from the Ashes.

At St. Andrews in Plymouth we joined a faith filled, evangelical congregation with a "heart for Jesus." They worship in a church rebuilt within the burned-out shell of the bombed building. The word "Resurgam," meaning "I will rise again" reflects the Christian hope of new life for all who trust in Jesus Christ, as well as the word found on a wooden board put up over the North church door the night the building was bombed in 1941. 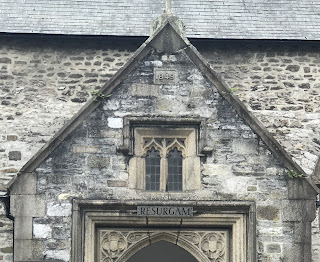 These photos are of the interior of St. Andrews. 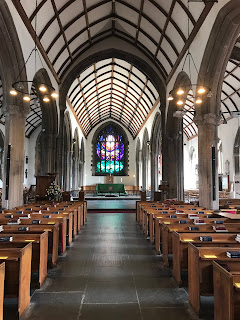 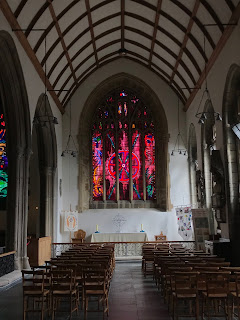 In Cornwall, thousands of American troops gathered to take part in D Day, the allied invasion on the Normandy Beach, beginning the defeat of the German armies. In a museum in Mevagissey we saw a video with local residents talking about their interaction with the American soldiers in town before the invasion. 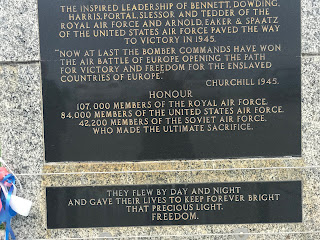 Every town we visit we see large memorials to the soldiers who died in World I, in World War II and in other wars. I know there are lots of these monuments in our country. In small Colorado towns the names of the local men who served in these wars are painted on the walls of local buildings. And cemeteries and cities and towns have war memorial monuments. They just seem much more evident here, where the war was fought on local soil. It is somewhat like the 911 Memorial in New York City.

Plymouth suffered 59 bombing attacks with 1,172 civilians killed and 4,448 injured. In 1941 most of the children were evacuated and on any night that a raid was expected thousands of people were taken by lorry in the countryside.

Bournemouth also suffered greatly during the war. On May 23, 1943, in little more than a minute the bloodiest bombing raid of the war there left 131 people dad, hundreds more injured, many of them suffering life-changing injuries. Some 3359 buildings were damaged, 37 of which had to be demolished. Among the destroyed buildings were the Lansdowne and Central Hotels. Air raid sirens were sounded only 7 minutes before the first bomb was dropped, the raid was such a surprise. Around 25 high explosive bombs fell on the town and the Pleasure Gardens were strafed with machine gun fire. Hundreds of Canadian and Australian airmen were among those killed and wounded in the hotels bombed. The Bournemouth RAF station was a dispatch and receiving center for the allied air troops.


Sent from my iPad
Posted by John and Carol at 1:23 PM