I don't know about anyone else, but I don't remember a lot of details of the early American history I learned in grade school or information about the early world explorers like Christopher Columbus, Magellan or Sir Francis Drake. We had a refresher course in some of this history during our time in Plymouth. One of the reasons we added Plymouth to our itinerary was because that is the harbor where the first Pilgrims sailed to America. 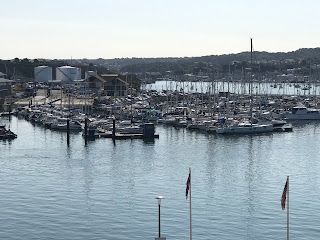 High on our list was a visit to the Mayflower Museum across the road from the Plymouth harbor.  We had to dress the part to explore the museum. 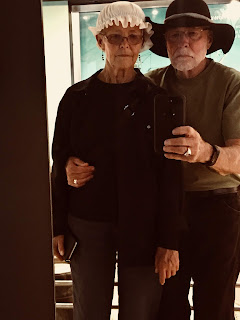 It took the Pilgrims 66 days to sail from Plymouth, England, to the place they named Plymouth near Cape Cod. They left England on August 5 and anchored off the American coast November 11. But many of the passengers had moved onto the ship in mid July and more joined them July 22. They lived on board the ship during the winter, not moving onshore until March 21. By then, only 53 of the original 102 passengers were still alive and more than half the crew had also died.

The deck the passengers lived on measured about 25 ft by 15 ft. It contained only a ladder to go up to the deck and had no privy. It must have been a harrowing journey for the brave passengers.

This is a painting representing the Mayflower as it sailed from Plymouth. 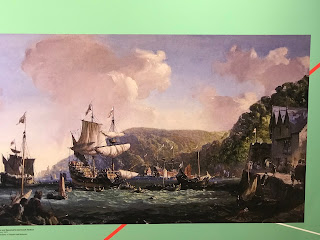 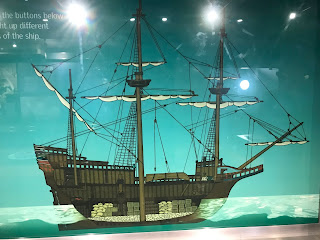 Other prominent expeditions from Plymouth included Sir Francis Drake who became the first Englishman to circumnavigate the world and Captain James Cook who charted the coastline of Newfoundland in 1767 and circumnavigated the globe at a very southern latitude, becoming the first person to cross the Antarctic circle.

Reading about events in America among the Mayflower passengers, I saw the names Myles Standish and John Alden and William Bradford that I remember from school history lessons. I also read about the Mayflower Compact which established a democratic government structure for the colony.

Sent from my iPad
Posted by John and Carol at 7:44 AM