We went hiking in Rifle Falls State Park today during the time of the solar eclipse. In this part of the state we were told there would be a 90% total eclipse. It was cooler during that time and it looked like dusk. The shadows were as dark as normal but the sun didn't feel as hot when were out in it. What made me most aware of the change in the light was the color of my transitions eyeglass lenses. This is the color the turn in full sun. 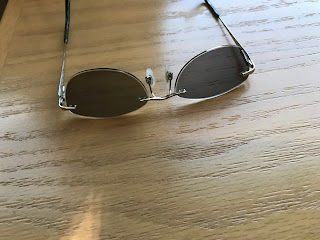 This is how dark they were 8 minutes before the 90% eclipse seen here in Rifle. 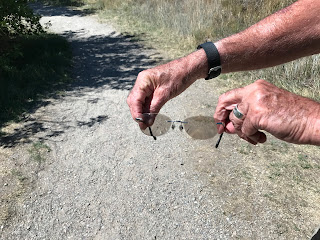 You can see the contrast of sunlight and shadow I photographed right at the greatest eclipse here. 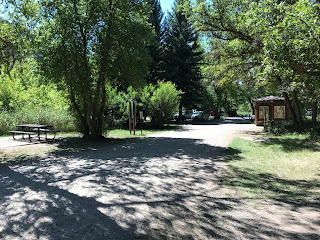 At first I thought this was just an interesting pattern from the narrow-leaf cottonwood trees. After seeing other people's photos, I think it shows the moon covering the sun. 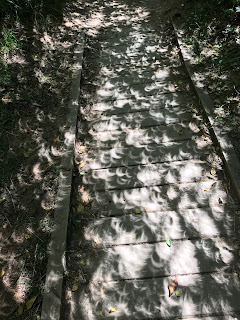 During the hike we came on a young woman with eclipse glasses and she let us look through them. 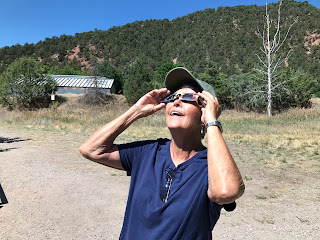 Looking through her glasses, we could see just a narrow crescent sun peeking out around the sun 10 minutes before the greatest dark of the eclipse. At almost the same time, this is my iPhone photo of the sun. (I knew not to look directly at the sun. I read taking a photo of the eclipse would let you see it. It didn't.) 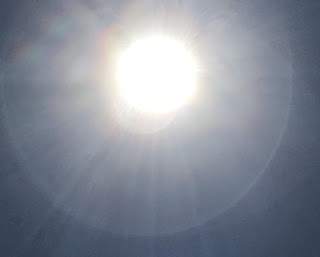 Our son Eric had several pairs of eclipse glasses and offered to try to get them to us. But since we were leaving Denver in a couple of days and were busy, we said no, we'd just pay attention to the dark that came with the eclipse. We didn't realize what a really big deal this solar event (lunar event?) was. But our experience was interesting and we did get one glimpse of what we could see through those glasses. Really amazing!
Posted by John and Carol at 7:28 PM