Are We In Control Now?

Back in January I blogged that It's Out of Control. That feeling continued through last week. On Thursday John met with his cardiologist. After showing him the results of a two-week session of heart monitoring, she said she wanted him to have a pacemaker implanted this week. What? John has never felt any symptoms of heart problems. But after looking at all the printouts of his heart activity, we could see that the heart would pause until an electrical signal came from a different area of his heart to get it beating again.

Obviously, it is important that the heart keeps beating regularly and the way it should. What could he say but when do I go to the hospital? Tuesday morning we arrived at Mountain Vista Medical Center at 5:30 am. They prepped him for the surgery. 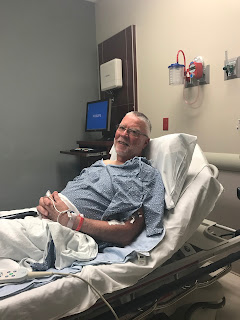 About 4 hours later he was giving the OK sign after being transferred from the recovery room to a bed in the telemetry unit where he spent the night. I returned to our house for a couple of hours, then it was back to the hospital so I could have dinner with him. 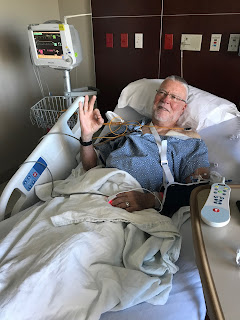 This morning we expected him to be released about 8 am. It was about 11 when he finally was able to leave and we were on our way 10 miles east back to the house. He looks a lot more at peace now, doesn't he? We hope were are back in control of our lives, for a while at least. 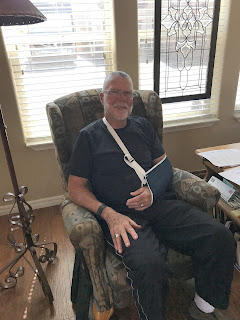