We aren't really aware of the little conveniences of life until they aren't there. That has been the case in our new house. Neither the living room nor the bedroom had overhead lights or outlets that are switch-controlled. Since both rooms had a set of two switches that are tied into an overhead covered outlet, it was possible to install a ceiling fan/light combination. Some of the other model homes already had them, but ours didn't.

We planned to buy two ceiling fan/lights and have someone install them for us. Two friends assured John he could do it himself. He decided to try. Thankfully, an electrician was wiring our RV hookup when we reached the place where the assembled fan needed to be connected to the wires in the ceiling. The instruction book described what to do, but added the caution that if the wires from the ceiling were different colors that what is described in the instructions, it was important to have a professional electrician do the wiring. John asked him to take a look, he quickly told John what to do, and we were able to complete the job.

Today, he attached the light fixture and put in the final screws. 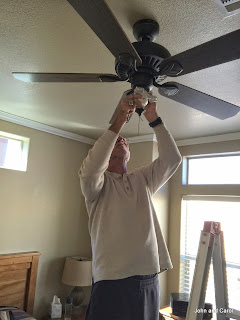 And look, we have a light and a fan on our ceiling. We can now walk in the dark room, reach to our left and turn on the ceiling light. It does a much better job of providing light to the entire room than the two bedside table lamps had been doing. And it is convenient to get to the switch. 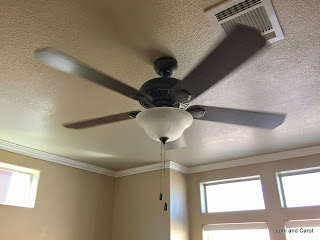 Often, it is the little things that make the biggest difference in our daily lives.  Next week, we will install the second fan/light.
Posted by John and Carol at 4:53 PM