A Lot of Work

Finally, today they began laying the concrete to complete our driveway and pour the foundation for our workshop and carport. The first workers showed up just before 7 am, way before the sun came up. 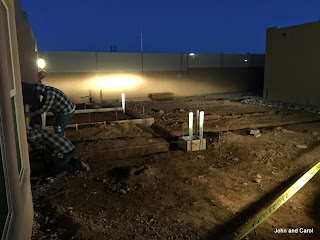 It was over half an hour later when the cement truck arrived. After the truck was backed in, they had to assemble the shoot to direct the cement to the proper area. 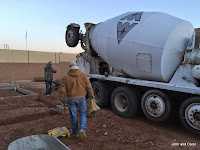 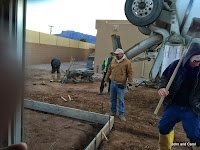 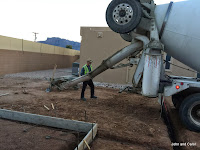 The concrete filled the footers for the walls and then they filled the deeper spots that will support the columns at the front of the car port. 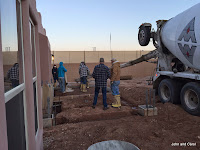 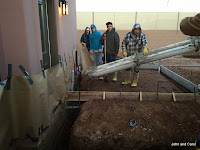 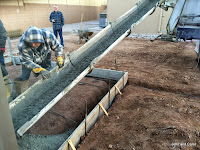 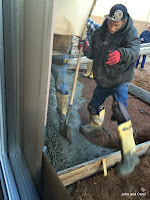 The workers were very neat--taping up paper on the walls of our house so there wouldn't be spots of concrete stuck there. Later, they even used some wet paper towel to clean up some spots on the walls. 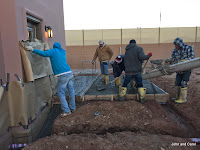 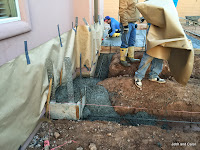 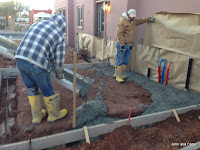 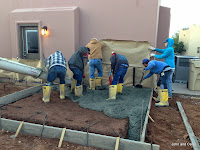 This is the cement truck driver, turning the flow of concrete on and off. 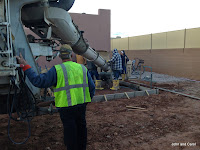 After they finished pouring the workshop floor, it was time to start smoothing the concrete. 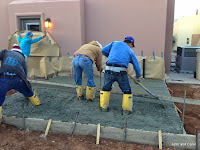 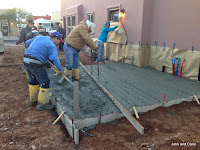 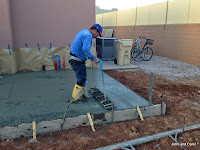 The cement truck drove off about half an hour after it arrived. But, that doesn't mean the day's work was done. The men were working for nearly 8 hours, the last one leaving about 4 pm. Part of that time, they did a lot more work making the workshop floor really smooth. Finally, they removed the forms around the floor and the supports for the carport columns. They also graded the driveway and put the forms in place for much of that area to be poured tomorrow.

We had no idea how much work goes into pouring an RV slab, a driveway, the floor of the carport, the workshop floor and footings. These men--some probably in their late teens, others up to maybe 40+--work really hard physically. And they know how to do things I haven't got a clue about. I know some people install their own driveways, even build their own homes. There is no way John and I would know how to do that. We have learned a lot about construction in the past 10 years of volunteering. But these fellows have knowledge we lack.

I am reminded that all kinds of skills and abilities are needed to make our lives good.

I will post about the rest of the work on our front yard later.
Posted by John and Carol at 7:20 PM