Yesterday afternoon, while some of the workers watched the concrete that had been poured and continued to smooth the surface, they began preparing the area for today's concrete pour. They had to level the carport area, as well as the RV pad space.  By the time they left, the forms on the concrete posts for the carport and around the floor of the workshop had been removed, as well. 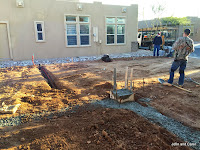 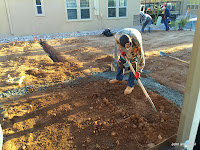 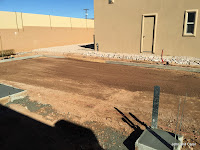 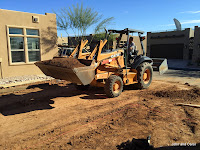 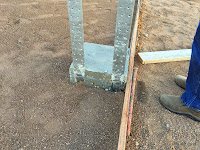 The last event yesterday was the arrival of the Zip Zap termite control man. He heavily spayed all the area that would receive concrete today. This is the first time we have had to deal with termites. It is standard procedure here. We don't have to do anything--the contractor calls Zip Zap to prepare the soil before they put in the concrete.

Some folks arrived a little after 7 am today to complete the forms. The cement truck pulled in just after 7:30. 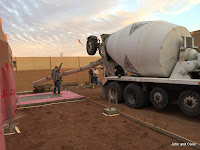 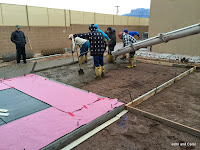 A barrier had to be placed between the solid concrete and today's new pour. They used a wheel-barrow of concrete to hold the barrier in place. They had masked the surface of the workshop floor so no wet cement got on it today. 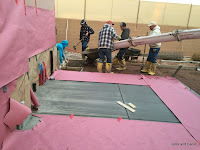 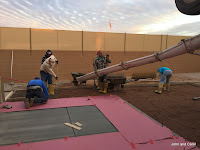 The next step was to pour the area behind the workshop. 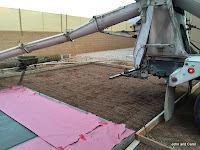 Then they moved on to the rear section of the RV pad. Notice the wire mesh that provides a backing for the thicker RV pad. As they filled in that large area, it was impressive to see how well the crew chief communicated with the cement truck driver, using only small arm and hand signals to tell him to direct the shoot right or left, to pull forward or back up, and when to let cement pour out and when to stop. If John and I could communicate that well when he is backing up the RV, life would be much easier. 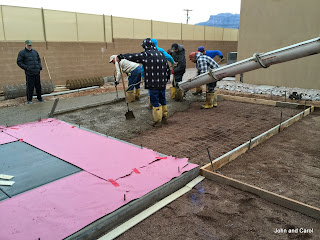 Finally, they poured the carport floor. 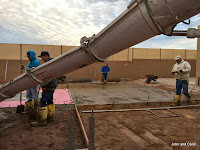 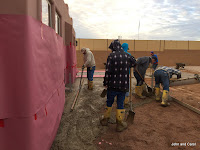 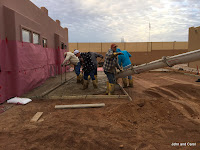 While that work was going on, one man continued to smooth the first section. 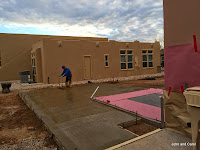 Notice how many people it takes to make sure the entire form is evenly filled with cement.

About half an hour after arriving, the cement truck pulled out while they continued to work on the last bit of cement poured. 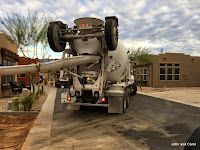 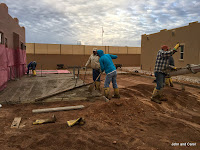 We had workers here for several hours, smoothing the cement, marking the seam lines, and sprinkling the surface with rock salt. The seams are there to help control future cracks. The salt makes small holes in the surface to improve the appearance of our driveway.
Doesn't this look good? We can hardly wait till they finish up on Monday.