Two or three times a week, there is a room here at Canyon Vistas where you can be sure to find us. 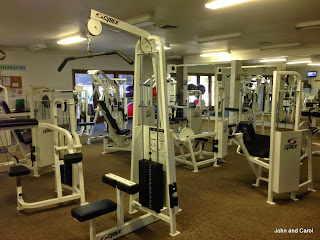 Thats right, we do our best to work out in the Exercise Room several times a week. First, a little bit of history.

When I started college at the age of 18, I started smoking. I didn't kick that habit until I was 38 years old. I tried to quit smoking several times a year over probably a 10-year period. Finally I did it--by giving myself permission to eat whenever I felt the urge to smoke. You can probably imagine what that meant. It didn't take me any time at all to gain 25 pounds. And I kept eating until September of 2002, when I weighed 175 pounds. That month, I received a letter from my health insurance saying they recommended that women not take hormone replacement therapy for long periods of time. I had been on them for 7 years and now I had to stop.

My issue with that was that the hormones helped to keep my bones strong. Since my mother had osteoporosis, I knew I had to do something to protect myself. After some research, I took a deep breath and signed up for a weight training class at the Goodson Recreation Center near our home in Colorado. I expected to be in a class with lots of young, strong men. To my delight, the other class members were all seniors, both men and women. Not only was I comfortable in the class, I soon really enjoyed the workouts. John had done weight training off and on since his teens. By January 2003, he, too, joined the class. And the really good news was that I lost 28 pounds by that April!

Since then, we have continued our weight training. A personal trainer designed routines for us, using free weights, for use when we traveled in our RV. In January 2009, we became full-time RVers and continued with that same routine for the past nearly 6 years. We knew it was important to change the weight training programs to keep muscles in shape, but never took the effort to make new routines. The good news is, I weigh the same today as I did in April 2003. The bad news is, that weight is 15 or so more than my lowest weight in the past 11 years. I would like to loose weight, but I try to appreciate the 28-pound loss I have maintained. If only I was still as tall as I was then!

For the past 6 winters, we have had access to circuit machines, but never bothered to use them until this year. It feels good to do something new. When it is cool to cold in the mornings, John runs on the treadmill and I use an elliptical trainer. 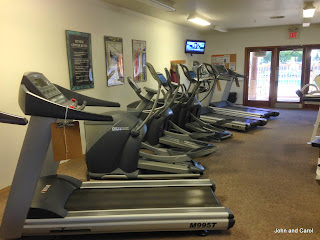 As you can see from the photos below, there are machines to work just about every muscle in our body. And there are lots of people here in the resort who like to keep fit by working out here. 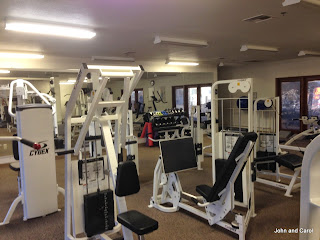 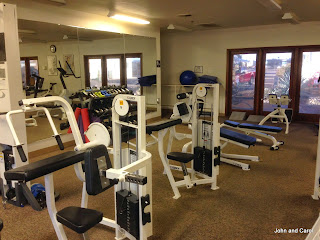