I've never been very interested in archeology, per se. From what I have seen and read over the years, being an archeologist means digging in dirt on hot, sunny days or looking carefully at things in a laboratory. Both sound b-o-r-i-n-g.

However, finding really old things is exciting and that has happened to John and me twice this year here at Casa Grande Ruins National Monument. In January, we were walking in a part of the Monument that is not open to the public when John almost stepped on this. 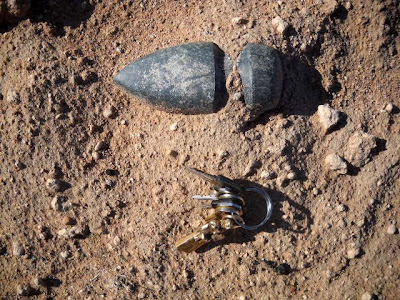 It is a three-quarter ax head that is more than 650 years old. You can see how large it is from the set of keys next to it. We immediately took a picture of it, made careful note of where it was, and went to talk to the chief ranger. She called the chief archeologist and he sent one of his staff to return to the site with John. She told John it had probably been dug out of the ground from a hole by a coyote or badger. We found it near a trash mound, where it had probably been buried for 100s or years.

Everyone was really impressed with the find, but there are so many of this type of object in museums, no one wants them anymore. Therefore, after measurements and more photographs, it was buried again. (All artifacts on National Park land are protected and may not be collected and taken home.)

Finding something that large is very unusual, but to see broken pieces of pottery here at the Monument is not unusual. This area was the first ever historical area protected in the United States, by order of the US Congress in 1889 and President Benjamin Harrison in 1892. That has means that pot hunters and artifact collectors have been very restricted for over 100 years. When you look at a small hill here, you can see pieces of pottery reflecting light easily. 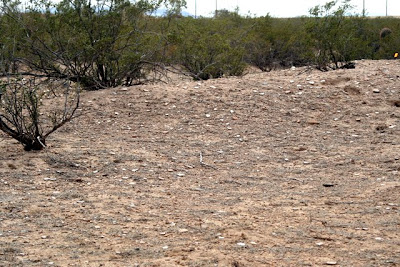 Up close, this is part of what I saw very near the area in the last photo. 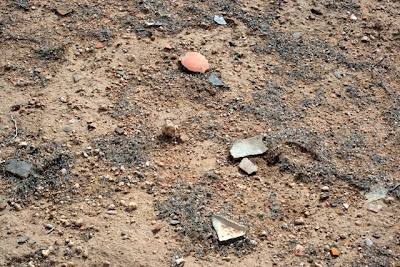 In past years, when areas of the Monument were cleaned or digging was done for buildings or other construction, pottery shards were gathered up and put in this pile with rocks that were also picked up. 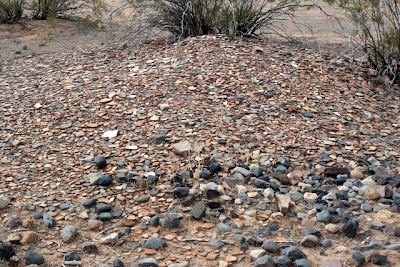 All of these scenes are from areas where the public does not visit. A small area of the National Monument is open to the public and thousands of people walk through the compound surrounding the four-story building we call Casa Grande Ruins. 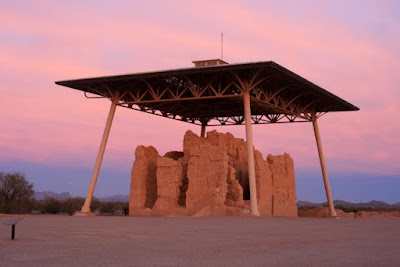 The area around the building has been back-filled with clean soil to make sure water drains away from the buildings after rain storms. All of this traffic and fill dirt made the discovery last week of a pottery shard really unusual.

Friday, after one of my tours, a young woman walked up to me and asked me to come see something she and her friend had found right in the public area. I was amazed when I looked at it. 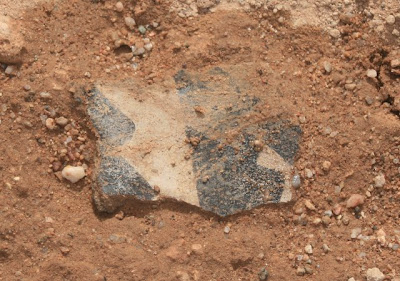 This is a piece of black on white Salado polychrome pottery, probably from the 1300s or 1400s. It must have worked its way up through the fill dirt over the past years, to be seen by those visitors. Again, one of the archeologists came to look at it. And again, they left it where is was found. Hopefully, no one will decide to pick it up and put it in their pocket. Instead, we hope it will remain for others to see and appreciate.

You can be sure I praised the two people who found it and left it where it was. That is exactly what we want our visitors to do.
Posted by John and Carol at 6:32 PM