We had a very busy weekend, working at the Third Annual American Indian Music Fest here at Casa Grande Ruins NM. The event brings Native American artists from throughout the U.S. and Canada for two days of performances. The stage is set next to the 650+ year-old four-story building once used by Ancestral Sonoran Desert people.

In addition to the musical performances, there are numerous exhibitors and vendors. Many were demonstrating how they manufacture their artistic works. We also had several desert organizations, including the Desert Archaeology Center and a raptor rescue group. Isn't this bird beautiful? 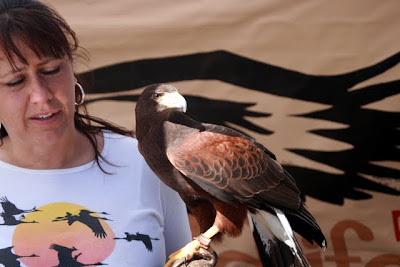 John Bear is one of the flute players who took part in the Music Fest. I chose this picture of him on stage because, if you click on the photo to enlarge it, you can see the audience and in the background the RV compound where we live with five other volunteer couples. 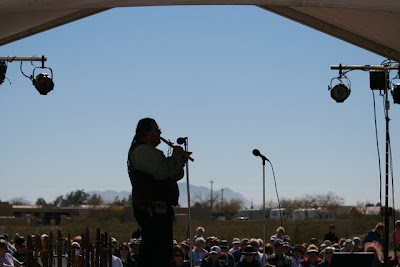 One of the most popular performances was by Estun-Bah, a group that includes two dancers. This is Tony Duncan, who a week ago won first place in an international hoop dancing competition. Here you see him jumping through the hoop, almost like he was jumping rope. 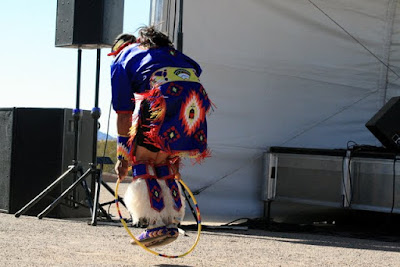 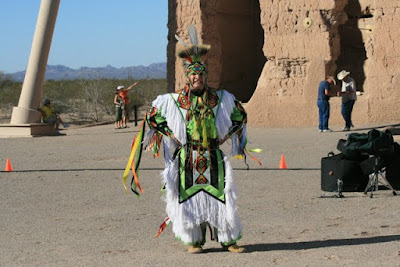 Two friends from Colorado, who now live in Tucson, stopped by to attend the Music Fest on Saturday. It was good to see Dick and Nina, though we didn't have much free time to spend with them. 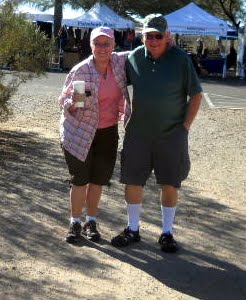 On Friday afternoon, John and I had helped the Monument superintendent unload the truckload of rental chairs and tables. Sunday afternoon we helped fold them up again and stack them. In between, John's work included assembling canopies for vendors, keeping an eye on foot and vehicle traffic in the vendor area, and staffing one of the two visitor desks in the Visitor Center. I spent most of the time collecting fees from visitors in a temporary booth set up outside. 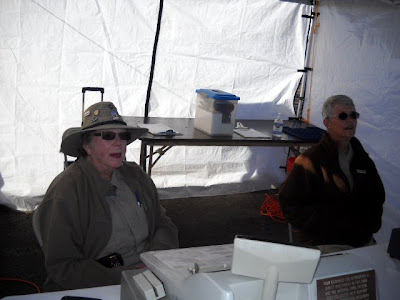 All volunteers work both days of the Music Fest. Since we work Thursday, Friday and Saturday, that means we had an extra day of work this weekend. That, plus putting in 10- and 11-hour days, meant we were pooped. Monday we slept in a little later than usual (meaning till 6 and 6:30 in the morning) and tried to take it easy.
Posted by John and Carol at 7:12 PM