We came back to Colorado and Estes Park in mid-July for a family reunion. John's dad had one brother and one sister. The reunion was for their children, grandchildren and great-grandchildren. We first all got together in 2006 in Boone, Iowa--where Aunt Hazel lived and raised her children. The children of the two brothers, C. Douglas and Frederick, live in Colorado. Since none of the Colorado clan did anything about planning another gathering, a Texas daughter-in-law of the Iowa clan arranged for us to meet in Colorado this year.

Estes Park is a community in the foothills of the Rocky Mountains, northwest of Denver. It sits at the eastern entrance to Rocky Mountain National Park. Almost everyone attending the reunion was staying at the YMCA of the Rockies facility just outside the park. We were in a commercial campground two miles from the Y camp.

We arrived on Thursday and spent a little time in Estes Park. It is a typical tourist town with lots of souvenir and T-shirt shops, numerous restaurants, and lots of traffic. These are the cars coming into the town from the plains. 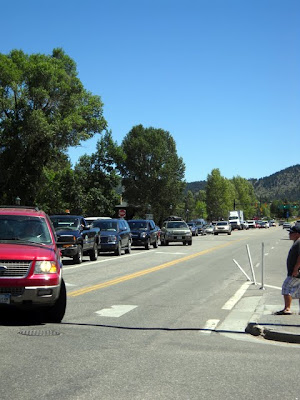 We enjoyed the flower pots on every corner and garden plots in front of many stores. 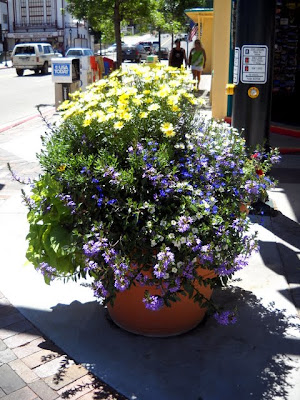 The St. Vrain River runs through the center of the small city and provides a soothing sound and view. 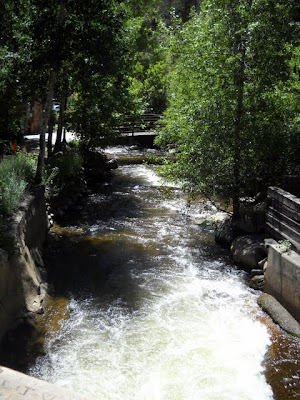 And this is the view from our campground. Is there anything better than a view of the Colorado Rockies? 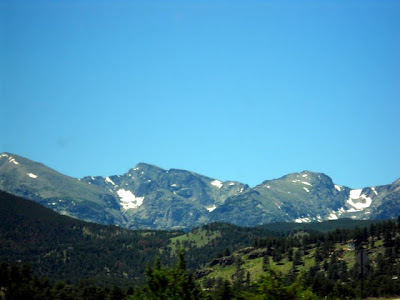 At the reunion, we caught up on the lives of other family members since we saw them last, looked at old photos provided by Ethel and Suzie from the Iowa branch, as well as others, and studied the extensive family tree John and I have researched and printed out. It covered four banquet-sized tables.

Late Saturday morning we posed on a stairway for a family picture--at least those who were there at that moment. Probably at least 10 more people attended the gathering but didn't have their photo taken. 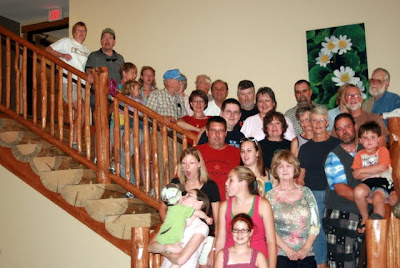 John has two brothers-in-law named John and our grandson is also John. Here are the four John's in one of the two Colorado branches of the family. In family language you are looking at Holy John (the priest), Young John (the grandson), Old John (the oldest of the four) and New John (the newest adult John member of the family). 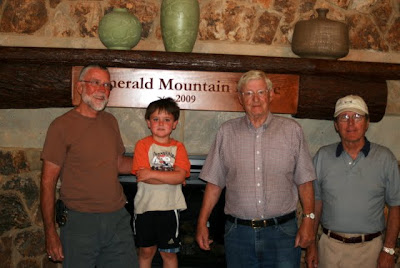 We were especially delighted that our son, Eric, and his family came up from Littleton to attend the reunion. We hadn't seen Eric since late March and the rest of the family since Christmas. Here is John with Kylie and John, our oldest and youngest grandchildren, with their Papa. 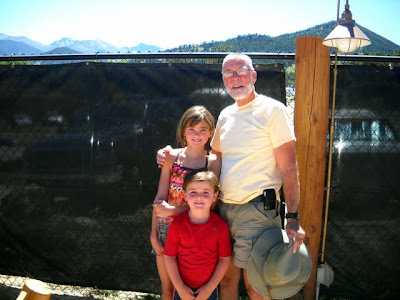 On Monday, after all the family was gone, we drove up into Rocky Mountain National Park. We lived on the west side of the park for a little over four years and have enjoyed visiting the park all our married life. It was a cloudy, dull day, but just look at this mountain view! 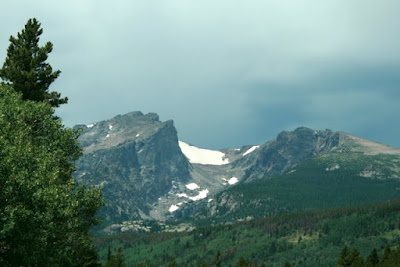 The pine beetle has destroyed large areas of the forest on the west or Grand County side of the park, as well in a wide swath of the Rockies from Canada into Mexico. We read that this has happened several times in the last 500 years. It may be nature's way of renewing the forest, but we hated to see the ugly brown trees that are appearing on the east side of the park. Aren't they awful? 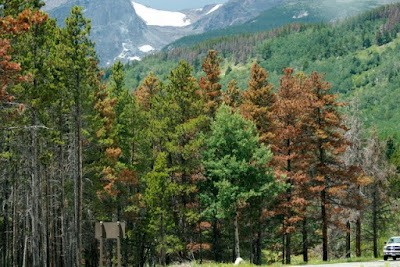