So, What Are We Doing?

We are staying home, of course.  We don't have any choice.  We only leave our resort to go grocery shopping.  Since everything in our resort is closed or cancelled, we only leave our house to walk.  It is the same for everyone here.  Lots of people are walking, some riding their bikes around the resort.  We saw a woman on roller blades yesterday.  And if exercise isn't their interest, people just drive around in their golf carts.  Reminds me of Sunday afternoon drives when I was a child.

I did a lot of house cleaning when the stay at home order first came out; recently we have begun going through our storage compartments.  John found a box of old letters.  In 1973 he spent 13 weeks attending the FBI National Academy in Quantico, Virginia. The FBI established this academy to provide training to local police department command officers  John was a lieutenant on the Boulder Police Department.  I stayed home in Boulder with our two boys, Doug age 5 and Eric 18 months.  We wrote letters to each other every day.  Since it was before the cell phone era, we only talked once a week.  Long distance calls were expensive.

We have both been reading those letters before destroying them.  We feel like we have stepped back in time 47 years.  Nixon was president, Agnew resigned during that time and the Watergate hearings were underway.  Our parents were all still alive and we almost feel we should give them a call this afternoon, just to see how they are doing.  We are in a real time warp.

We have been a keeper of old family photographs in both our families.  We all know printed photos deteriorate.  I have been making digital copies of these photos periodically over the years.  I decided now was the time to finish the job.  Yesterday I copied 620 photos, mainly from the first 25 or so years of our marriage.  In the past I have copied many of the family photos from before we were born.

I am almost done with the copying.  Now I am trying to move them into albums so I can find something when I want to.  So far, I have only done that with part of the 620 newly copied pictures.  I wonder if I will finish this task before we are free to travel and shop again?

Other folks in our resort have different ways to keep busy. We see notes on the streets, written with colored chalk, hearts cut out and put up in windows, banners of encouragement. Here are two cute signs put up in one yard. We saw the top display today for the first time. The second was from late March. 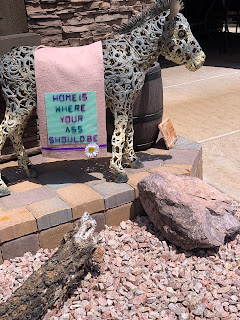 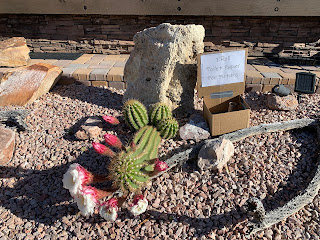 Stay safe and healthy, everyone.