Like just about everyone I know, I bought an InstaPot a year or two ago.  It was small, only a 4 quart model.  I quickly realized it was too small to cook those things I use my crock pot for--like a beef roast.  So, I was storing the crock pot and InstaPot.  I did like all the recipes I found for the new appliance, but I never got used to using the pressure cooker function.

So, what did I do?  I bought a pressure cooker.  I had gotten rid of the one I had used since we were first married over 50 years earlier.  The new one looks almost the same and, except for having the steam valve in a different location, I knew how to use it immediately.

And I donated my InstaPot to the Goodwill.

I made a roast in the new pressure cooker the first Sunday.  And I am using my crock pot to serve meatballs today and to make white chicken chili during the coming week. 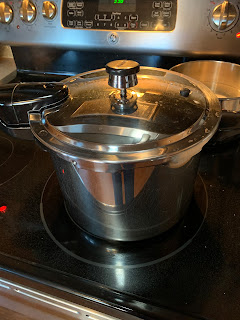 When we went full-time in our RV 10 years ago, I gave my KitchenAid mixer to our daughter-in-law Liz.  It was just too large to carry in the RV.  Instead, I depended on the hand mixer I had received as a wedding gift. 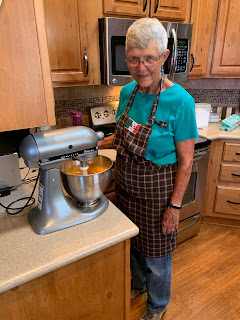 A couple of weeks ago, I bought a new KitchenAid.  I have plenty of room in our Arizona kitchen.  It does a much better job on cakes and mashing potatoes than that hand mixer!

I love these appliances and they make cooking so much easier.  But it leaves me feeling old fashioned.
Posted by John and Carol at 2:38 PM