Over our years of traveling in Texas, we knew there were many German immigrants who settled here in the mid- to late-1800s. We are staying in Schulenburg and today visited their history museum. Between 1844 and 1847 thousands of Germans immigrated to Texas, escaping the Austro-Hungarian Empire. It was the largest colonization in Texas history. Many of them settled around Schulenburg. The local history museum provides an excellent description of the history of this area. It focuses on death, early pioneers, military, merchants, religion and the fire department, as well as other subjects. 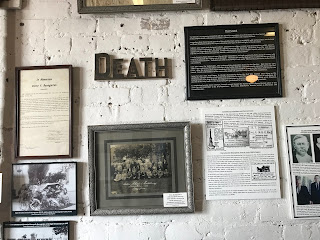 In the section on death in the museum told about the families that have owned and operated the local funeral home as well as how customs around death vary from culture to culture. John grew up in a funeral home and we owned it for about 9 years. But we still learned something. At least in this area, a group of women were flower bearers, carrying the flowers displayed at the funeral to the cemetery where burial occurred. Choosing those women was as important for a family as choosing the men who served as pallbearers. All were selected from among friends and associates of the person who died. We had never heard of this custom. 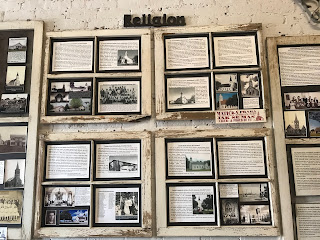 The section on religion covered the establishment of churches in the community. 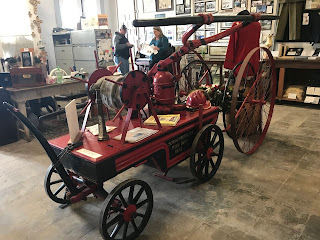 The volunteer fire department in Schulenburg was formed in 1873. This fire "truck" had a human- powered pump to spray water on a fire. It was used in addition to bucket brigades. I wonder how many fires they were able to extinguish. 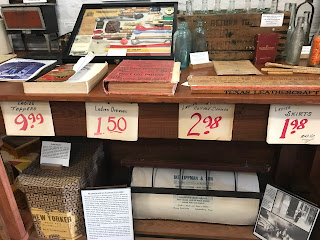 Of course, merchants were among the early settlers in the town. Those businesses were what attracted other people to settle nearby and served the needs of the population. Just look at the prices seen on this display. The museum docent knew they were real signs from the dry goods merchant in town but she didn't know what year they were from. The prices are certainly not what we see today. 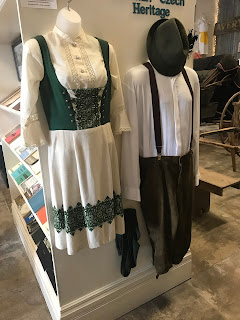 These are costumes belonging to some of the German/Czech settlers around Schulenburg. 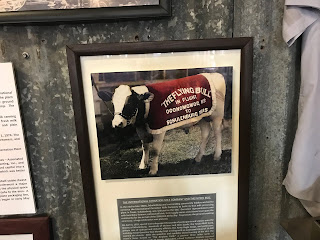 In the 1920s the leaders in Schulenburg convinced the Carnation Milk Company to build their first milk processing plant in Schulenburg. This blanket was worn by a dairy cow that came by plane from Oconomowoc, Wisconsin, for the groundbreaking ceremony.  There was a huge celebration in Schulenburg. Since we once lived in Oconomowoc, we were most interested in this bit of local history.  The reference to flying cow had another connection, as well.  The Schulenburg schools mascot is the flying shorthorn. 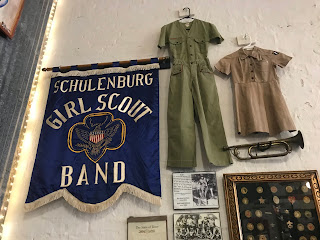 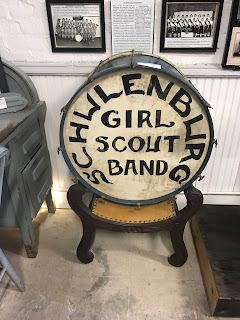 Both the Boy Scouts and Girl Scouts organizations were popular here. There was even a Girl Scout band. 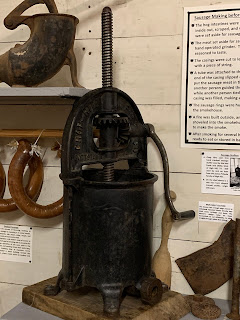 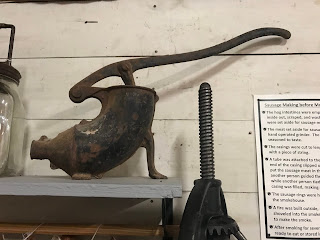 Sausage making was and is popular to Czech and German people. These two machines show a sausage hand-stuffer and a more mechanized version. 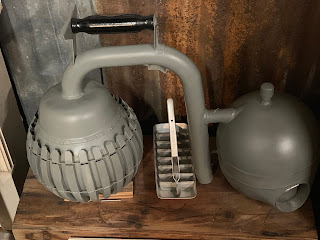 This is a Crosley IcyBall. As unlikely as it looks and sounds, this contraption would freeze water into ice. It was used before most rural areas in Texas had electricity to freeze food (and ice).

We enjoyed reading about all the interesting items and history on display in the museum.

Just down the street was the Polka Music Museum. Whoever heard the like? Polka music is still popular here. As we were looking around the museum, a local man came in and asked the woman staffing the front desk what polka band she was going to go hear on New Year's Eve. 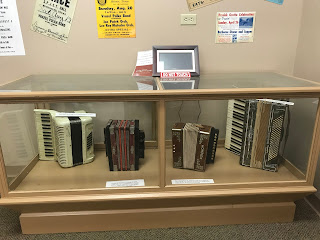 When I think of polka music, I first think of accordions. These were on display in the museum. 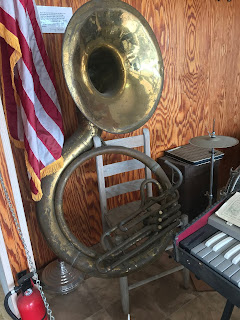 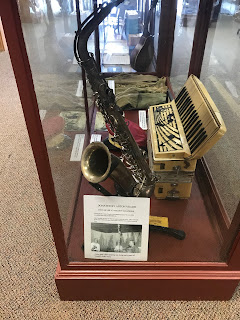 I don't necessarily think of the tuba or saxophone, but obviously they are also used in polka bands. 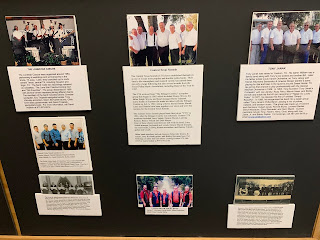 The display included a number of local polka bands. Some of the band names were interesting. The one that most got my attention was Oma and Oompahs. I think that means grandma and the grandpas, but I'm not positive.